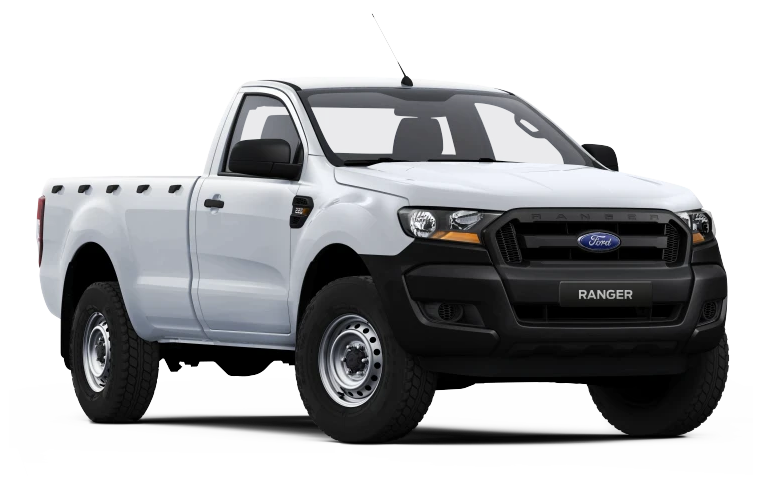 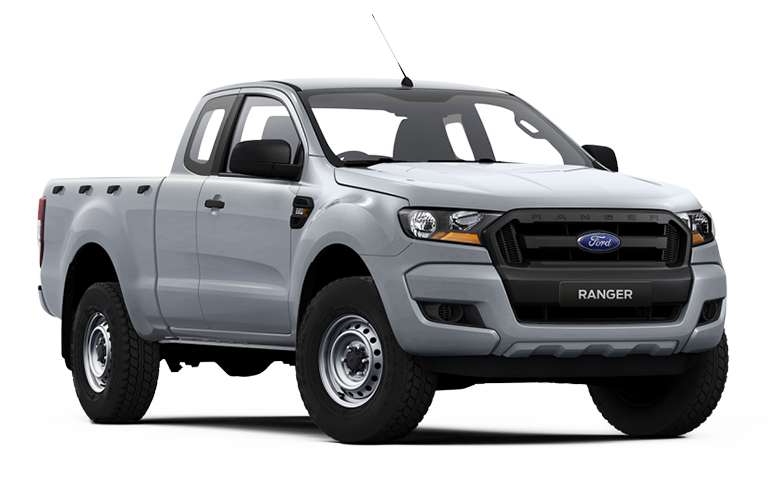 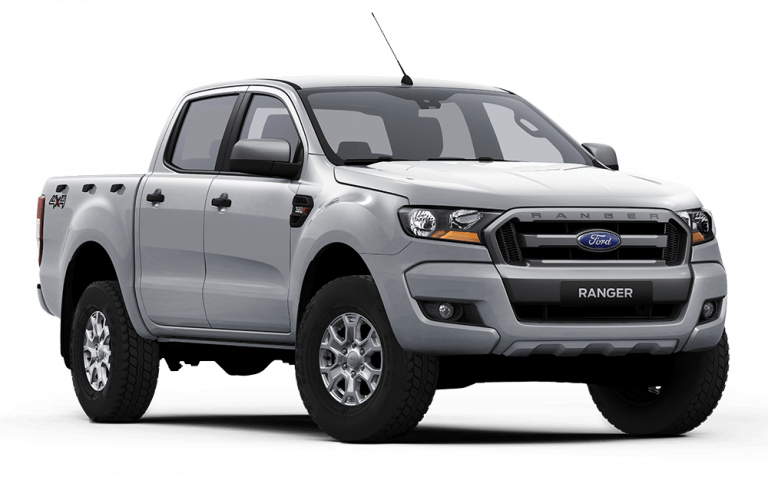 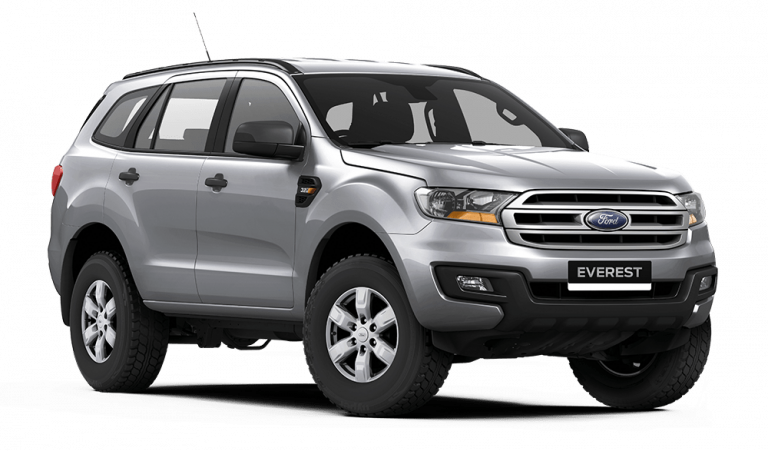 The title of this story is taken from an internal Ford speech and was used to describe the Baby Boomer demographics at the time of the creation of the Mustang. The Company spent a great deal of time and effort to try to anticipate what the changing automobile buying environment would look like in the 1960s and had come to the conclusion that they did not have a product that fit the needs of these new consumers.

The Baby Boom generation was coming of age and more people were attending college than ever before. Ford market research had consistently shown that college educated consumers buy cars at a phenomenally higher rate. For example, in 1962, 46% of new car purchases were made by people with some level of college, despite the fact they only made up 18% of the total population. Additionally, more US families were looking to add a second car to their garage. The number of families owning two or more cars increased from 1 million in 1959 to 13 million by 1963, and was continuing to rise. Research showed that women car owners were one of the segments growing most quickly and that the number of female drivers had increased by 53% between 1956 and 1963. Women typically made the most use of the second car and they were forming decided opinions about what kind of car it should be – small and maneuverable that would handle and park easily. In other words, there was a large, particular, youthful, educated market being created with a special emphasis on woman drivers.

This youthful market would play a bigger role in purchases and had certain wants, including the option for manual and automatic transmission, bucket seats, and a sporty flair to their cars. Research also indicated that design preferences included the sound of a high-performance engine and the feeling of being close to the road. Our internal documents noted “given the ingredients of youth, education, good pay and a desire for style and sportiness in automobiles, we still had to keep in mind that a large segment of the market we were aiming at was made up of young people who were just getting started in life and had good potential and fancy tastes in durable goods – but relatively little ready cash. An early design objective was to keep the car within the range of those buyers.” So, a low entry level price was deemed critical to the success of the car.

The attention to detail as the car was being planned was exhaustive and comprehensive. Given the youth of the potential market, the Research Department conducted a study on the perception of bucket seats as an aid or hindrance to romance among young people. The study was conducted at colleges in eight cities across the country and “42% of the sample size preferred bucket seats for first dates but the number declined to 15% for couples going steady.”

Our designers created three styling cars and we took careful readings on public reaction to their features. We invited selected groups to look at these experimental cars and give us their opinions. The first was the Allegro concept car that was produced along the lines of the increasingly visible European imports. The car featured several innovative design features including a fixed seat, movable brake and accelerator pedals and a swing arm steering column to allow easier ingress and egress to the car. The long hood and grille features were later adopted for the production Mustang. 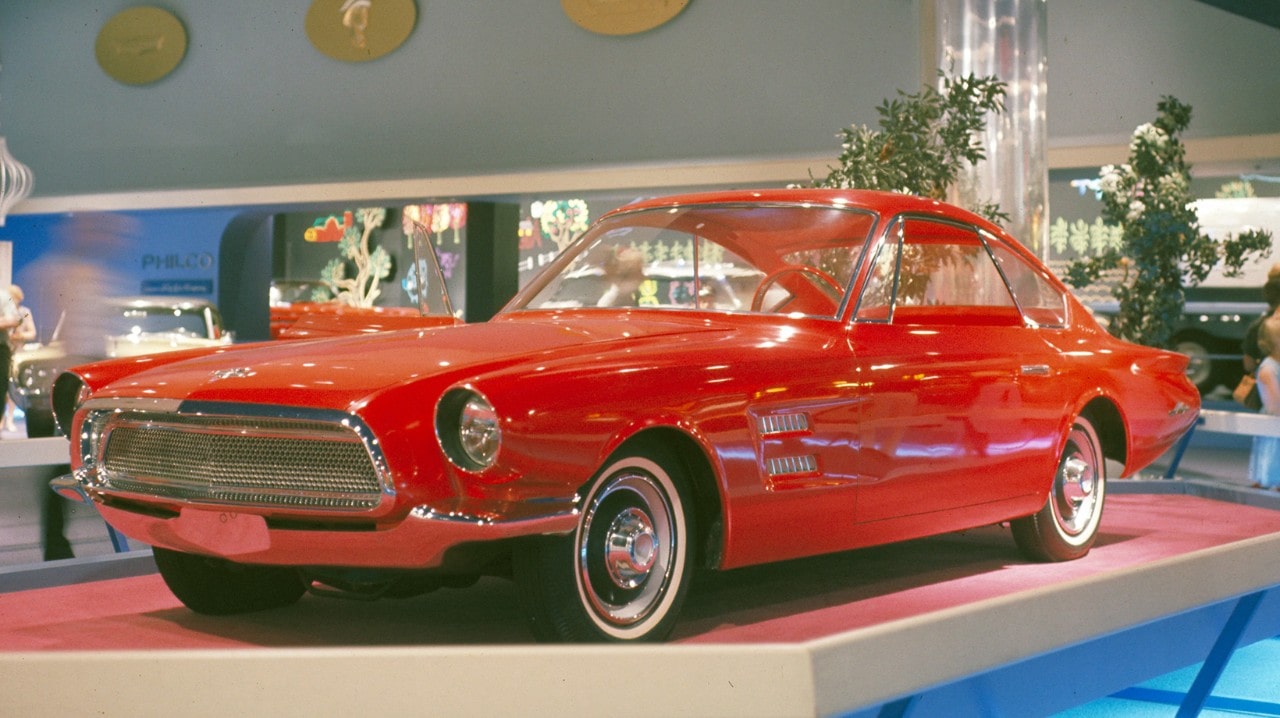 The Mustang I was a two-seater concept car that also borrowed from European styling notes. Two versions of this small, sporty model, with a mid-mounted engine and side flow scoops for cooling, were created. First a fiberglass show car and a second fully functioning vehicle that premiered at Watkins Glen on October, 1962. The Watkins Glen premiere created phenomenal excitement as people poured from the stands to surround the car. Both versions were also used extensively at car shows and were toured around college campuses to gauge interest in the smaller sports cars. 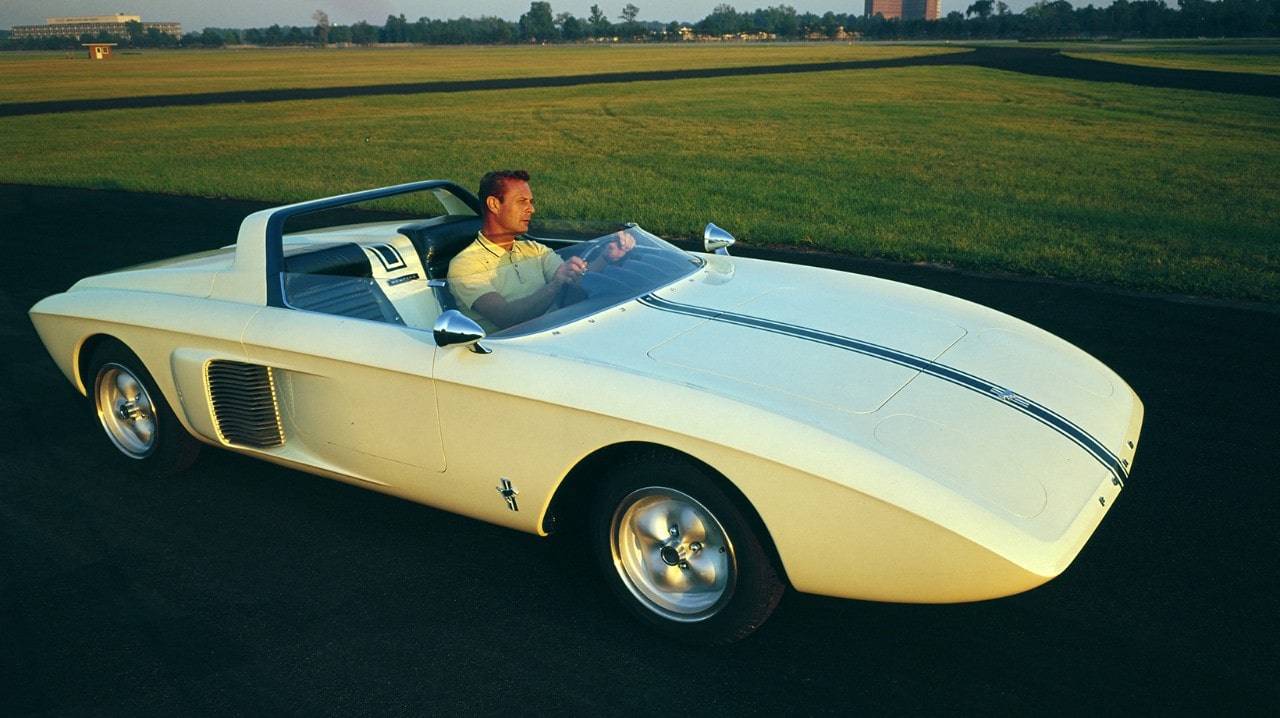 A crash program was undertaken to get an early design solution. Designers of the Corporate Projects Studio, the Ford Studio and the Lincoln-Mercury Studio were given package dimensions and asked to engage in open competition with only two weeks to present clay models of their design ideas. Two weeks later, seven design entries were reviewed and one stood out distinctly. The top management came back again and again to a little white car with red wheels produced by Ford Studio. To validate the choice, select groups of potential buyers were invited to view the seven proposals where, once again, the Ford Studio model was the favorite. A design was set.

Before the details were finalized, the Mustang II was conceived as a market research tool to validate the design choice. This four-seater sports car incorporated elements of the forthcoming production Mustang. The car’s body, reinforced with fiberglass, was stretched out five inches and the roof lowered by three inches. The concept made its debut at Watkins Glen in October 1963 to whet the appetite for the forthcoming production Mustang. The car was described internally as “Personality: demure enough for church-going, racy enough for the dragstrip, modish enough for the country club.” 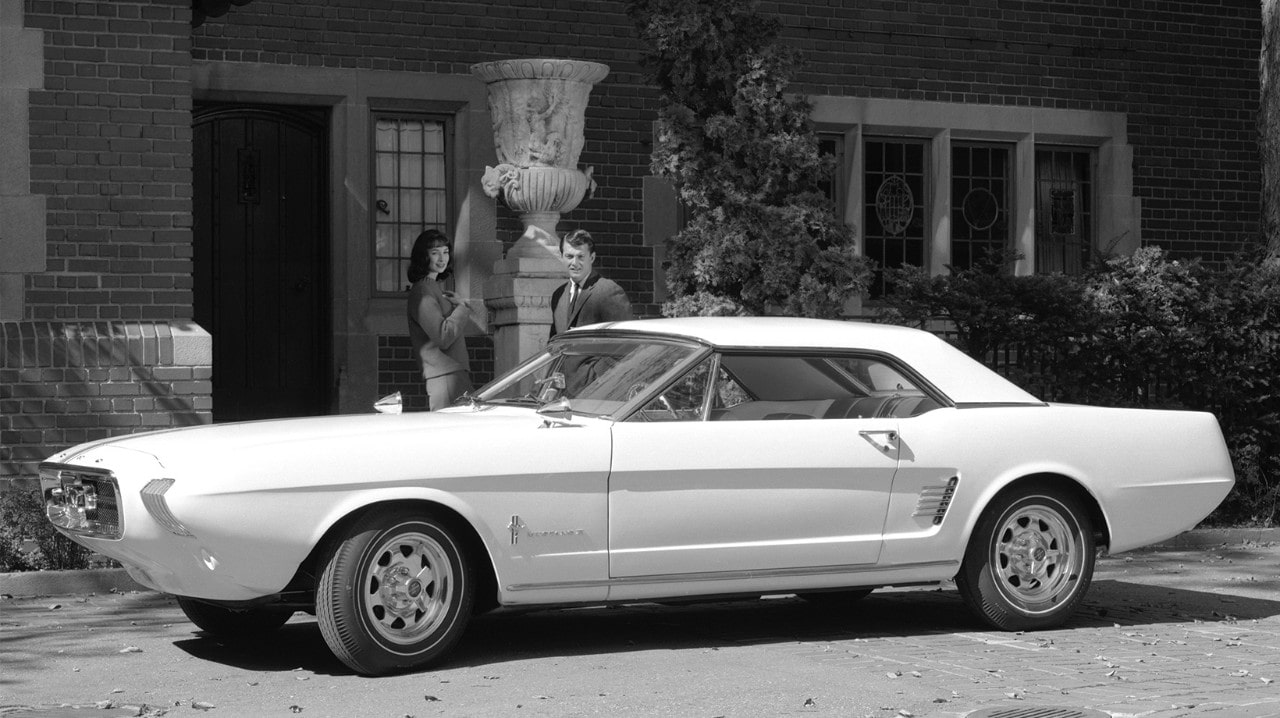 The introduction strategy for the car is best illustrated by a story. The Company brought 52 couples with young kids in to see the Mustang. This group should have been outside of the expected demographic for the car, given their small children. After reviewing the car, the couples were asked if it would be a practical automobile for the family. Most replied “no.” The couples were then asked to name the price they thought the car might retail for. Most picked figures that were thousands over the expected selling price. When they were told the actual price, the couples underwent a strange transformation of opinions. Husbands and wives went back for a second look at the Mustang, and without exception began to find reasons why this car really would be practical for them after all. The design, features, options and price made it irresistible.

Our internal marketing noted “we decided to go heavy on glamour photographs of the Mustang to show off its fresh new styling. We would soft pedal the performance and practicality angles, and we would shout about the unexpected low price from the rooftops. We would rely on styling and price to send prospective customers scurrying for and excuse to decide the car would perform and handle well, we wouldn’t belabor that point.”

The stage for the introduction had been set, Ford felt it had a winning design and great price, but how should they let everyone know about the new pony car? The press conference announcing the car for the media took place at the New York World’s Fair on April 17, 1964 to a wide large media contingent. One other approach that day was groundbreaking - for the first time in TV history, a major automotive manufacturer bought time on all three networks to run an ad stressing the price and looks of the car. The ads ran on HAZEL (NBC) PERRY MASON (CBS) and the JIMMY DEAN SHOW (ABC) and were seen by more than 29 million viewers.

The “Mustang Mania” was instantaneous as customers flooded dealerships across the country to see and drive the new car. A Chicago dealer had to lock the doors of the Mustangs in his showroom, because so many people were trying to crowd into the cars at one time and they were in danger of injuring themselves. In Prescott, Arkansas, population 2,500, more than 450 high school students showed up en masse and nearly caused a riot trying to see the new car. A Pittsburgh dealer with a Mustang on the wash rack could not get the car down because of the crowd below. In Garland Texas, 15 people bid to get the only showroom model with the winner sleeping in the car to make sure it was not sold before his check cleared the next day. More than 4 million customers visited showrooms the first weekend, but many came to do more than just view the new car, as more than 22,000 were ordered during that time. These are just a few of the countless stories as the nation fell in love with the Mustang. 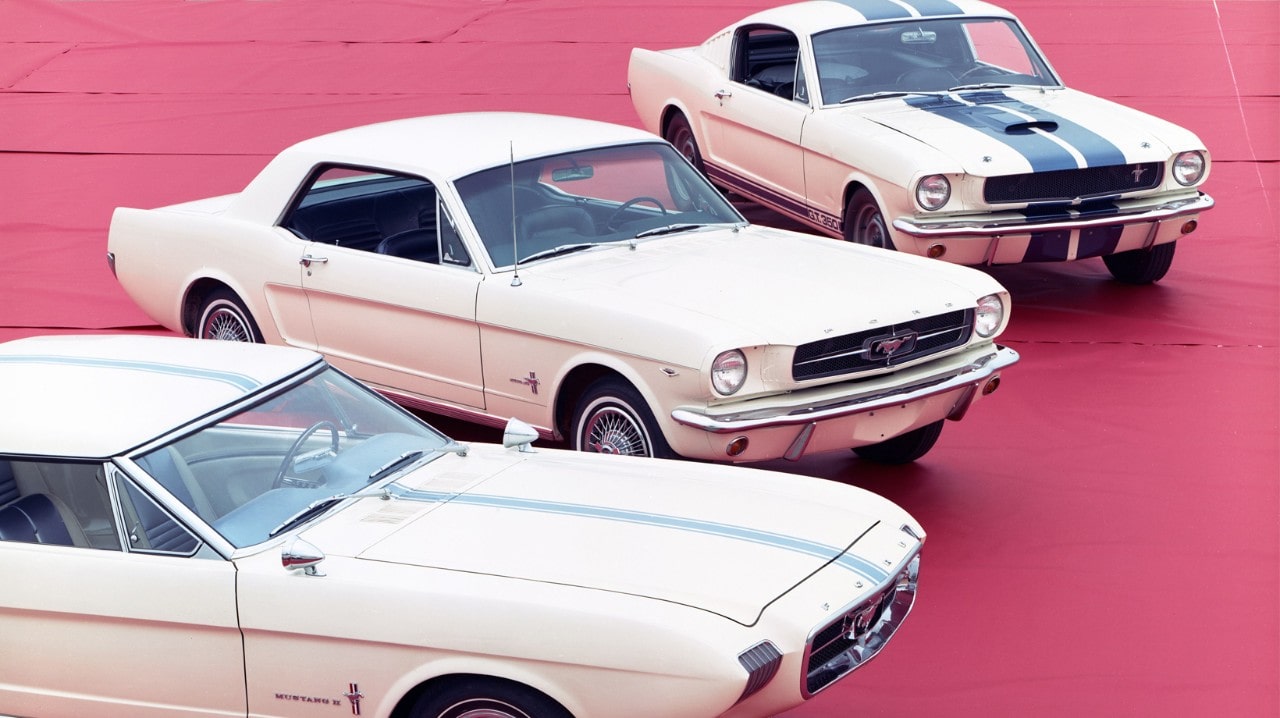 Within four months more than 100,000 Mustangs had been sold and the car had taken its place among the top five automobiles in sales volume. In all more than 420,000 were sold the first calendar year making the Mustang the most successful car launched in the U.S. The car also connected on an emotional level as the Company received more than 4,000 pieces of fan mail from customers who were in love with their Mustangs.

On March 2, 1966 the one millionth Mustang rolled off the assembly line at the Dearborn Assembly plant. In doing so, the Mustang not only set a new U.S. passenger car production record, but was also hailed as having the greatest impact on the American economy of any new car since World War II, with retail sales of more than $2.8 billion and more than $180 million paid in wages. 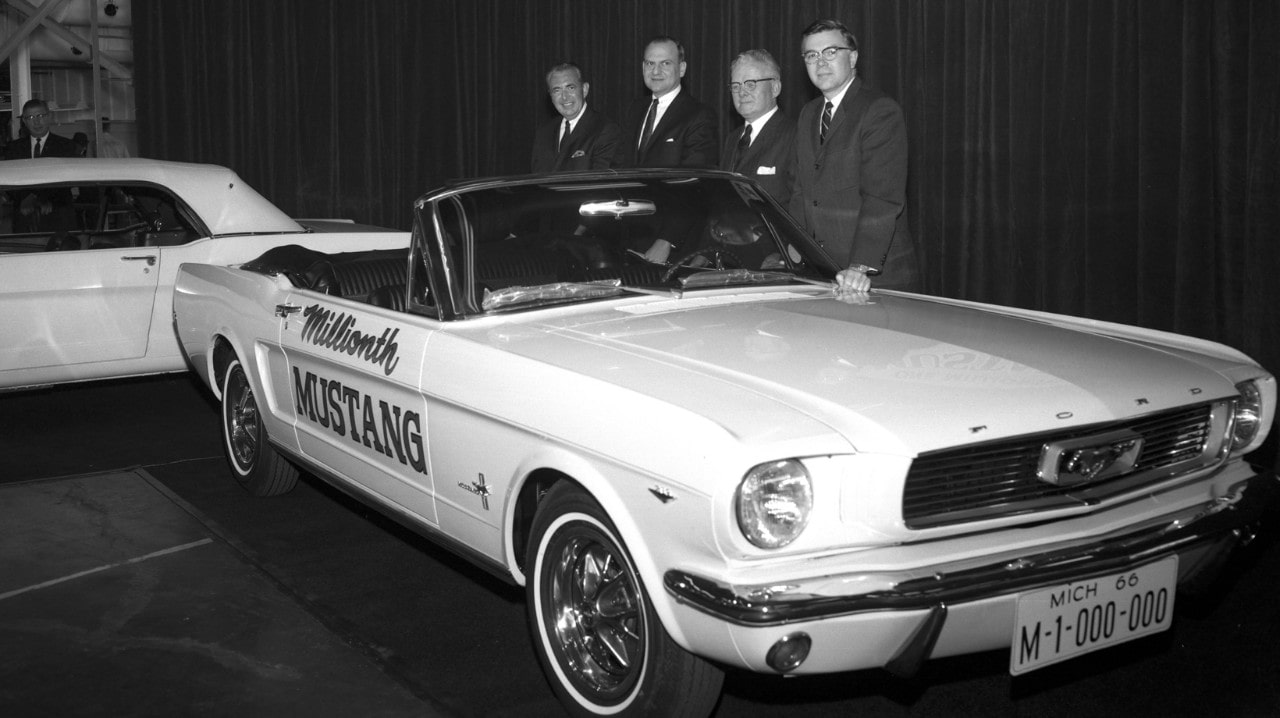 The Mustang had not only retained its youthful appeal but more importantly it attracted new buyers to Ford. The median age of purchasers was 31, with more than 28% of the buyers younger than 25 years old, compared to age 42 for the median purchaser of the regular Ford car. 35% of Mustang buyers were single compared to 9% of typical Ford buyers. The most common attribute among all buyers was that more than 80% indicated that the car’s appearance was the single most important factor in their decision.

A few other notes on Mustang sales notes:

In its first two-years, the Mustang had changed the automotive landscape. A market was emerging with Baby Boomers looking for a car they could call their own. Ford Motor Company was ahead of the curve with the design and delivery of that car - the Mustang - and it became a sensation. Ford Vice President Donald Frey summed it but best by saying, “Mustang has come to mean more than either a horse or automobile. Mustang means fun and youth and glamour. Mustang means sunglasses and shoes and hats.” 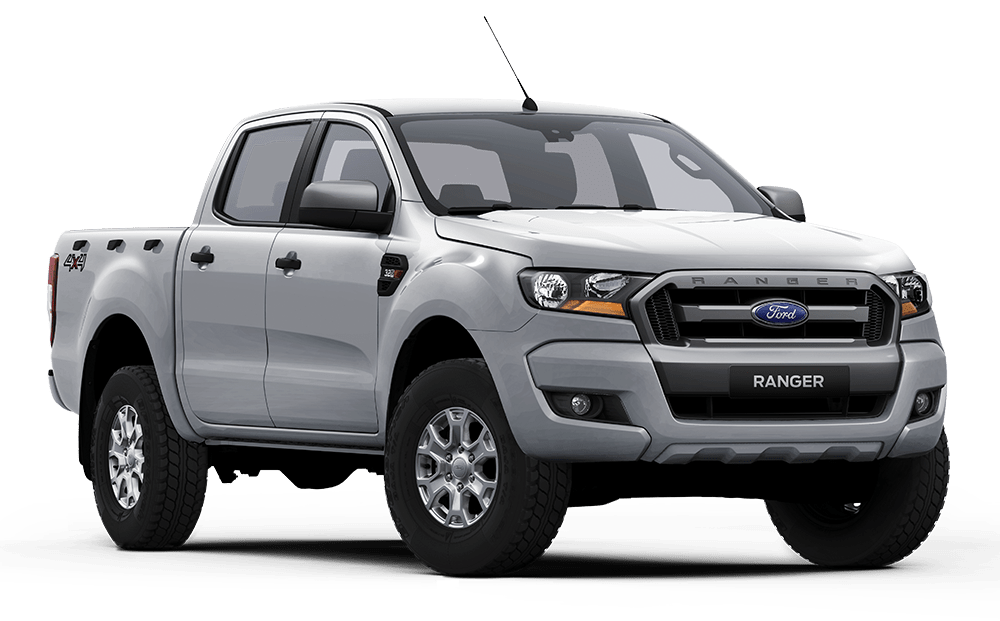 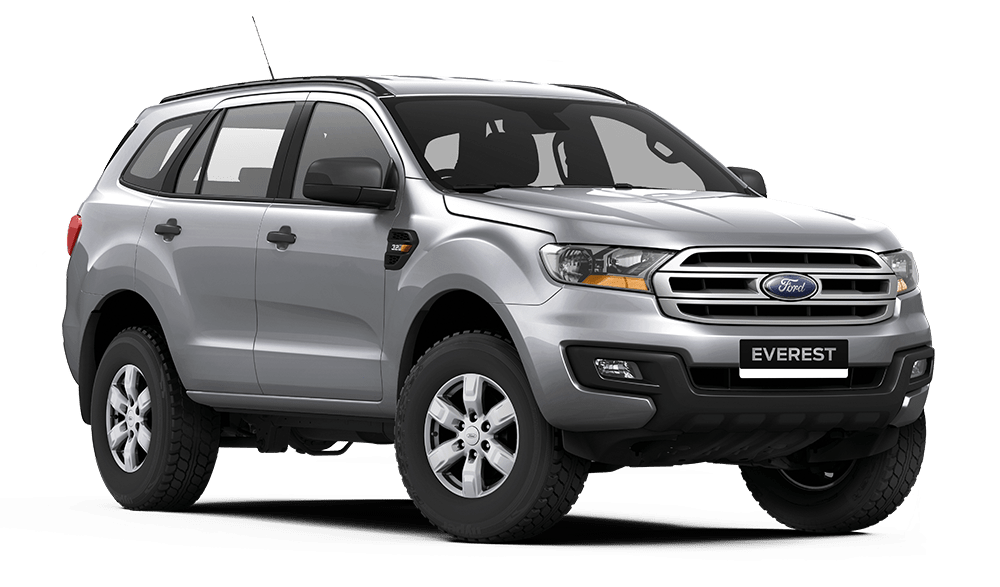